A few months ago, I was interviewed by Blog Expat for their Expat Interviews feature; a lovely time was had by all. Answering the questions made me reflect deeply on my years living abroad – how did I get here (Ryan Air)? What advice would I give other expats (stock up on Jell-O)? But the question I had the toughest time answering was: What is the biggest myth about your adopted country? Now that was a real head-scratcher; a real Sophie’s Choice of a question. In the end, I went with perhaps the largest myth I encounter: Italy is paradise; nothing bad ever happens there; it’s beautiful delicious dreamland; how dare you complain about anything if you live there? Right… if you’re just on vacation and don’t have to deal with bills, work, garbage build-up, and the giant, unreliable pain in the ass that is the Italian public system.

But I digress. While I greatly enjoyed getting that off my chest, I soon realized that I was still unfulfilled. Had I really done enough? This ring. This watch. There are more Italian myths I want to bust for you. Here. Take my hand. Take a breath. And prepare to get your cultural preconceptions rocked.

All Italian men are sexy stallions

If I had a euro for every time my friends back home asked me So how many SEXxXxXYyYyY Italian stallions have you hooked up with so far?, I could buy myself enough pints of ice cream to soak up my bitter tears.

Think about it. Your idea that Italian men are super sexy comes from TV, movies, and that one time you met that one guy when you were backpacking through Europe and were on the hunt for foreign tush so any guy looked good, right? Well, in films, the romantic leads are plucked from that microscopic pool of genetically-blessed organisms that represents THE MOST BEAUTIFUL THING YOU HAVE EVER SEEN. I mean, if you believe Hollywood, you believe that all Americans look like Angelina Jolie and Brad Pitt. Same goes for any other nation that frowns upon incest: genetic pools are full of variation. In real life, you get your uglies and you get your pretties, no matter where you are. I’ve traveled a lot around Italy, and can honestly say that while I’ve met a few cuties, I’ve only met one man who knocked my socks off. Sigh.

But let’s say you do find that Italian man who really stirs your spaghetti; depending where you live, the chances are very high that, because of adherence to tradition or economic pressure, your Italian stud lives at home. Yep. “Failure to Launch”? More like “As Italian as Ricotta Pie.” If you live in a big city where there are high populations of Italians who’ve migrated from other regions for work, the chances that your stud doesn’t live at home increase, but if your ridebag is a Roman living in Rome, you will probably be shit out of luck. And let’s say that the fact that your horse-hung dude gets his underwear washed by mamma doesn’t cause your girl parts to shrivel up… where exactly are you banging this manly macho man? In a car – like a teenager? In a hotel – like a prostitute? In a friend’s empty apartment – like a mythical teenager/prostitute/mistress hybrid? GRAZIE, MA NO GRAZIE, SIGNO’.

…. wait, I’m not done. Also? A lot of Italian dudes dress like chicks. I can’t tell you how many times I’ve seen a promising expanse of broad shoulder, only to be stopped dead in my tracks at the sight of a pink polo shirt with a popped up collar paired with a pair of  Bermuda shorts that have “Hot Buttered” written in cursive across the ass. What the fuck am I supposed to do with that? The headbands. The diamond stud earrings. The loafers without socks. The pointy-toed shoes and the purple sweaters with the snaps and the zips and the lace-up corsets. Help me. Help me understand. Are they chicks or are they just European?

So… zero. Thanks for asking.

All the food in Italy is delicious, 100% organic, and hand-made 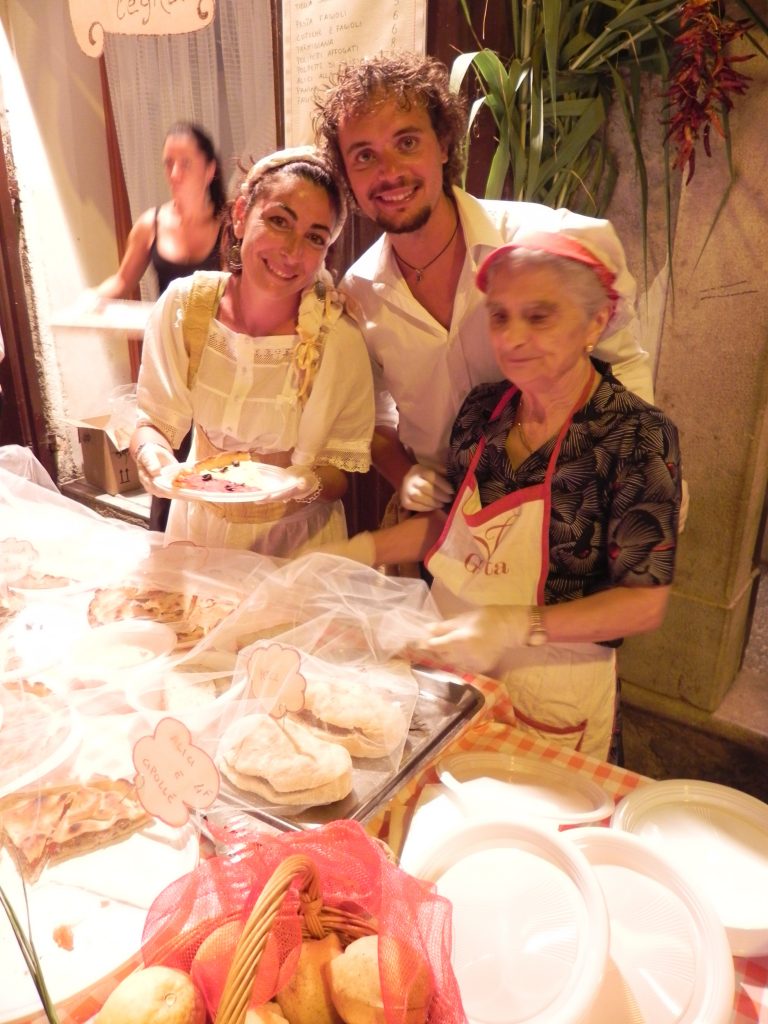 Yes, Italian cuisine itself is mind-liquifingly excellent, but cooking is a skill and not everyone is good at it. In my time here, I’ve eaten a lot of food that wasn’t prepared well (seriously – my neighbor Maria can ruin spinach, and that’s no mean feat). Also, Italy is a country where women work outside of the home. That means that there is an increasing demand for processed foods and supermarkets. Only a couple of generations ago, Italian women spent entire days traveling between butchers, wine distributors, bakers, and produce vendors. My grandmother kneaded all of her pasta by hand until she hit her late 70s. My great-grandmother once tipped over my dad’s Fiat 500 by putting too many kegs of wine in the front. My married female friends who work? They’re buying packets of soup, tinned beans, and frozen pizza just like you.

Processed food culture is still relatively new in Italy, so there is a higher importance placed on organic ingredients. Flora and her mother grow and make their own everything from olive oil to canned veg; they’ve even got chickens, ducks, and quail out back. Piercarlo’s mom grows the basil from which she makes the pesto. But I also see asterisks on pub menus which denote “Item may have been frozen” and have had “meals” served to me directly from the supermarket freezer section bag it was sold in. Bottom line: it is easier to get delicious, home-grown and home-made food here. It’s just not all like that, and it’s not like that all the time. 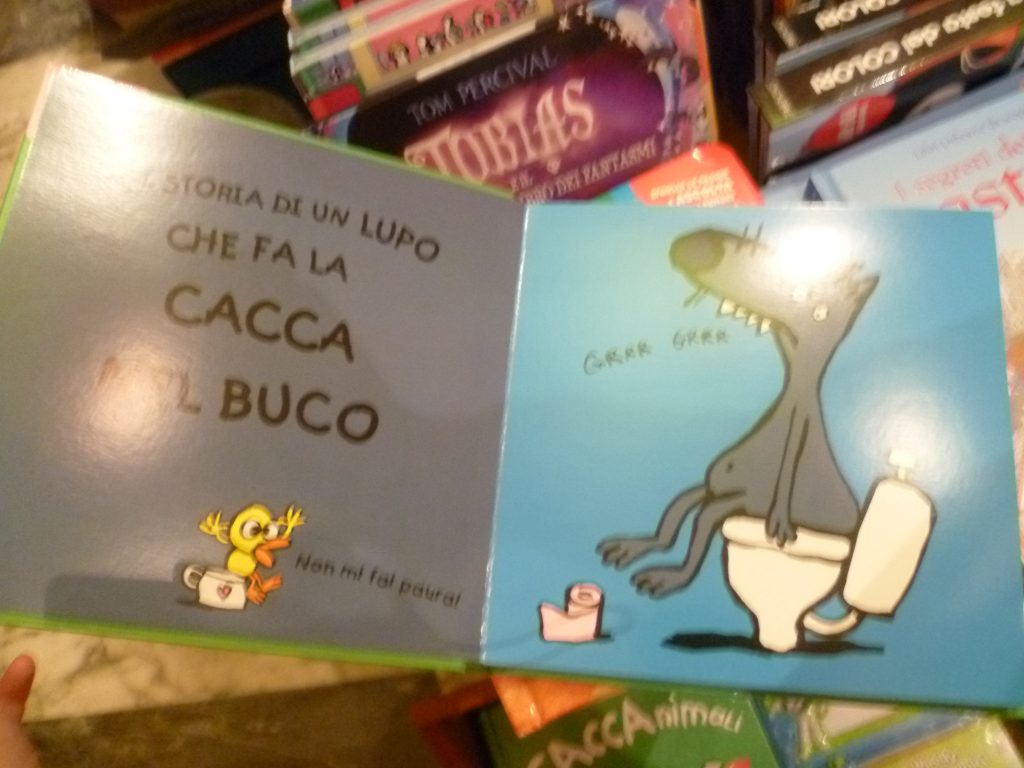 Many cultures fall into the trap of objectifying the “other” – especially when you’re an American dreaming about Europe. Europe is more technologically and socially advanced than we are. Europe makes better clothes and buildings than we do. Europe makes food that tastes better than our food. Europe is fancy. Look at this awesome plastic knife shaped like a hippo!!!! – Yeah, I totally got it in Europe. Everything in Europe is sophisticated just because it’s European, right?

Of course, large European cities have a certain glamour to them. But in any culture, you will find varying levels of – how shall we say – sophistication due to differences in education, economic status, and location. A small town is a small town, no matter where it is. A small-minded person is a small-minded person, no matter where he grew up. I live in a small town: I see lots of bad fashion and lots of track suit-wearing parents who feed their newborns soda and dangle them over their arm without supporting the head. Rough people who break windows and key cars for fun. Country mice who can’t understand why anyone would leave the town where they grew up. Racism, too: Romania = bad!!! Gypsies = dirt! Africa = bad! China = ching chong bad!!

Man orders pizza but gets served his own crap instead: CLASS.

Ask any one – even in “sophisticated” cities like New York you find morons, bigots, and overgrown children. Well, we get ’em here in Europe, too. They just speak a different language.

Every square inch of Italy is gorgeous 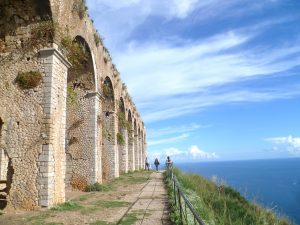 Yeah, I know. We do all right here.

My friends and I often joke: Where were you today? Beautiful Latina. Isn’t the centro of Sabaudia gorgeous? Make sure to bring your camera – so many beautiful things to see! Italians have Fascist architects to thank for these angular, toad-like atrocities. Now present and future generations have to deal with these “futuristic” monstrosities until some government official gets their crap together and razes them from the face of the planet. So, forever, basically. 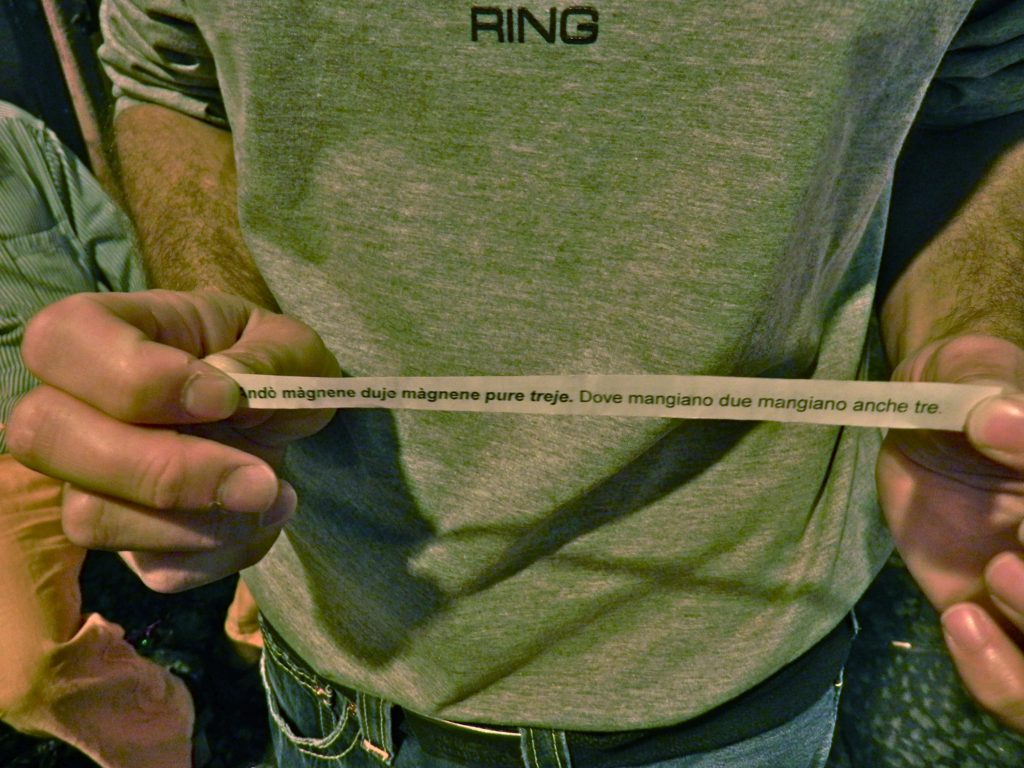 Italian is the official language of Italy. It derives from Latin. It has roots beginning in the 10th century. It is the language of business, art, education, and literature.

Fangul, gumba, capeesh, and paisan are words in Italian dialects. Italian dialects – such as Napoletano, Siciliano, Milanese, Terracinese, Fondano, etc – are not Italian. Italian dialects are the many, many other languages that evolved in various parts of Italy at the same time Italian was evolving. They are the languages that are spoken in the home and between people from the same region. They are the languages brought over to America by the early waves of Italian immigrants; words passed down through generations and, as time went on, mistakenly identified as “Italian” by the immigrants’ non-Italian speaking American descendants and popularized as such through the books and film. If you’re not an Italian speaker and think you know an Italian word, chances are very high that you’re using dialect. Mozzarell? Dialect. Gabagool? Dialect. Scungil? Salù? Pasta fazool? Dialect, dialect, dialect.

The use of dialect – il dialetto – is a touchy subject in Italy. On the one hand, the use of dialect is seen as a unifying badge of community. On the other hand, the use of dialect is considered to be a mark of ignorance or low-class; i.e., someone who never went to school and learned to speak Italian. My mother was horrified when I came home from kindergarten armed with an “Italian” word that an Italian-American friend had taught me: That’s dialect. That’s wrong. You will never use those words! Only illiterate people speak dialect! Learn to speak Italian! I didn’t come into contact with dialect again until I was 17 and visiting my mother’s family in Colleferro, when I noticed that her aunts were chopping off the ends of their verbs. What’s wrong with them? I asked my father. Why are they talking that way? My father replied: That’s Roman dialect. It’s awesome! Try it. My mother has never forgiven him.

I love words so therefore, I love Italian dialects: my power grows each day. Italian dialects are rich and vibrant and sometimes so different to each other as to be unintelligible to outsiders.

I’m completely fascinated by them and can’t get enough. Northern? Southern? I want it all! My friends are, in equal measure, proud and mortified that their dialects are rubbing off on me: when Flora and Mona – cousins – start speaking to each other, they unconsciously lapse into Fondano dialect and Riccardo has made it his mission to instill me with a healthy dose of Sperlongano and Napoletano. Emilia is already busting out Culonese words and I just love it to death! But Fondano, Romanesco, Sperlongano, Napoletano, and Culonese aren’t Italian. My mother says: As long as you know the difference, you’ll be all right.

This is blatantly false! Italians sometimes work, okay? Usually between the hours of 9 and 1, before pausing for a well-deserved 3-hour lunch break – and then picking up again after 4:00 p.m. Gosh, this myth really burns me up – Italians work hard! Offices and business are open for 11 months of the year, four days a week, excepting major religious holidays, and occasionally when you ask an official for help, they’ll give it to you – what else do you want?

Italian myths… busted! In your face! I’d celebrate with a glass of Prosecco but it’s Wednesday so my bar is closed.

18 Replies to “Five Myths About Italy”