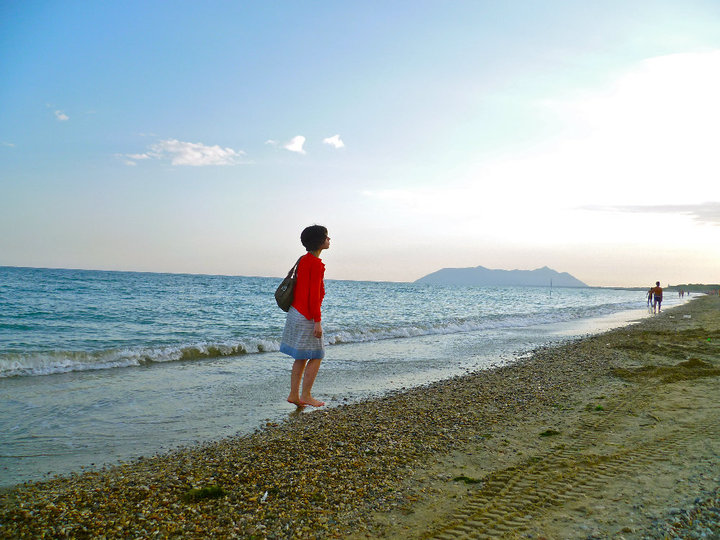 That’s me, on the day I moved to Terracina; the first day of what was meant to be a three-month writing retreat. It was a simple plan; I would live in my grandparents’ apartment. I would eat Italian food and lie out on the beach. I would finish my Master’s thesis and work on my novel. It would be easy, seeing as there were no distractions; I didn’t know a soul.

That was in 2010. And this was once an expat blog; one of the millions of expat blogs hatched in 2006. I Eat My Pigeon followed me from my earliest expat days: writing about my daily humiliations as a gaijin in Osaka, Japan. Then I wrote about getting my master’s in Creative Writing at Trinity College, Dublin. Now I write about my life in Terracina, Italy.

The reason I came to Terracina and the reason that I have stayed for so long are very different. Very personal. The stuff of Novel #2. But for the moment, here are some questions I am prepared to answer:

Wait … you eat your what?

My pigeon. “I eat my pigeon” refers to a Japanese language mistake I made about a month and a half into my time in Japan.

What were you trying to say?

I dashed into the pub, blurting ““私のハト食べる!” to the puzzled staff, snatched my hat and dashed back out – quite pleased with myself. I had just learned how to denote possession and I knew that many words in English could be used in Japanese, such as “ice cream” (pronounced aisu kur-ee-mu) and “card” (pronounced kaa-do). “Hat” and “table” are not such words. “Taberu”  means “to eat” and “hato” means “pigeon.” I eat my pigeon.

You dork. Did you ever figure out how to say “Excuse me – I forgot my hat”?

I have no idea what you just wrote. How many languages do you speak, anyway?

English is my native language, but since my parents are immigrants from Italy and Guatemala, I grew up trilingual. Then, when I moved to Japan, I was determined to learn Japanese. In February of 2009, I passed the 3-kyuu Japanese Language Proficiency Test, which puts me at about early Intermediate Level. This should, in no way, suggest that I speak Japanese.

In Italy, I conduct my life in Italian. If the dialogue seems a little wonky some times, it’s because I’m amusing myself by giving you a literal translation. I’ve lived here six years and my Italian level has improved significantly – I read novels regularly and passed my written drivers’ license test, if you want an indication of my skillz and that was awesome, I am awesome – but this should, in no way, suggest that I speak Italian.

I taught ESL from January 2007 to September 2018 and hated every second of it. But while the classroom definitely wasn’t for me, I spend most of my time is spent thinking about the acquisition of language – the learning and the teaching of it. I’m completely fascinated by it, and have lots to say about it, so I hope this will be fascinating for you, too. If only my students had been half-as-interested in this shit as I am.

And what about the poor pigeons? Have you ever eaten one?

NO, and this is what I consider to be my fatal flaw. Jellyfish, alligator, horse, buffalo, rabbit, goat, pheasant, quail, all manner of offal including rooster testicles in Hungary, but not once, not yet, no pigeons. Dammit. Dammit. Dammit.