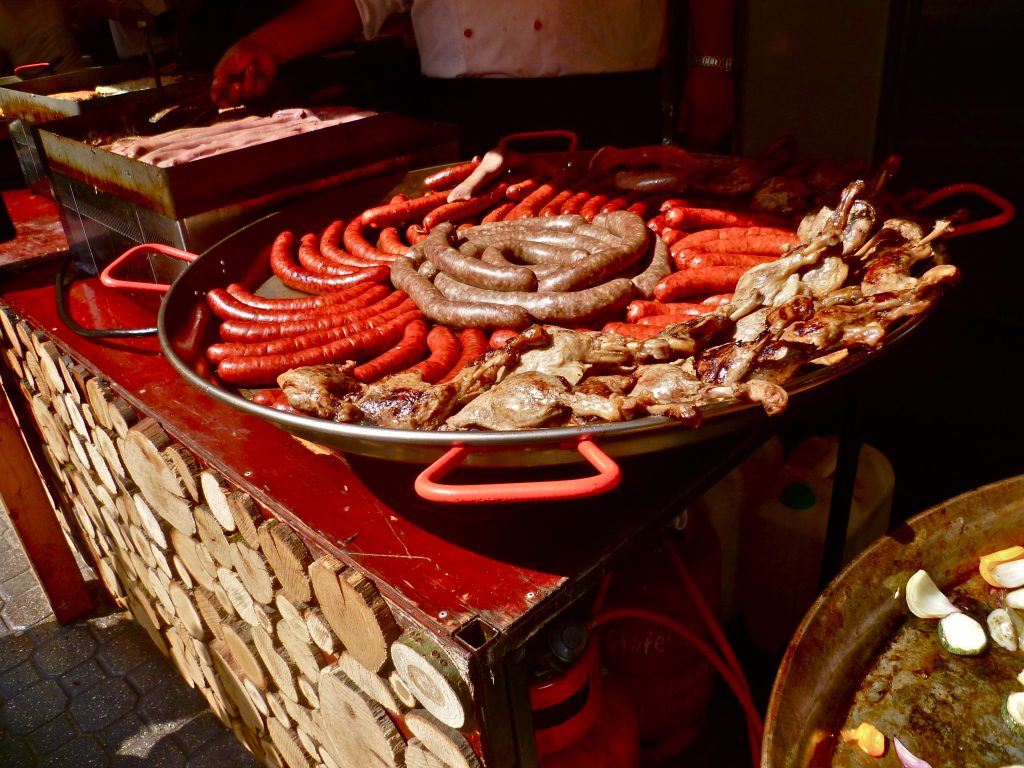 One kiosk attendant stirs a black cauldron full of porky, savory gulyás. Another rolls out floury potato dough to shape into dödölle. 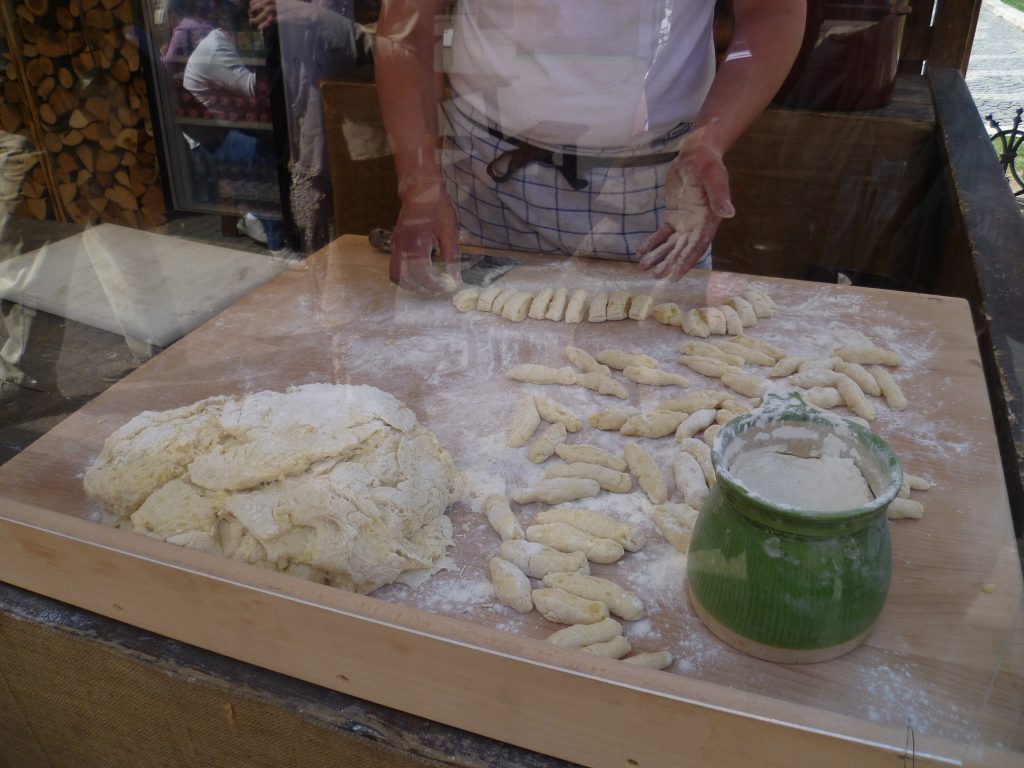 There are glass tanks of fresh lemonade, teeming with thin slices of lemon, limes, and oranges. Side dish stations overflowing with tangy sauerkraut, plump beans, and sour cream. Grills sizzling with juicy sides of pork. Artisan Hungarian beers. Pots of pork-and-rice-stuffed cabbage. Chicken on the bone! 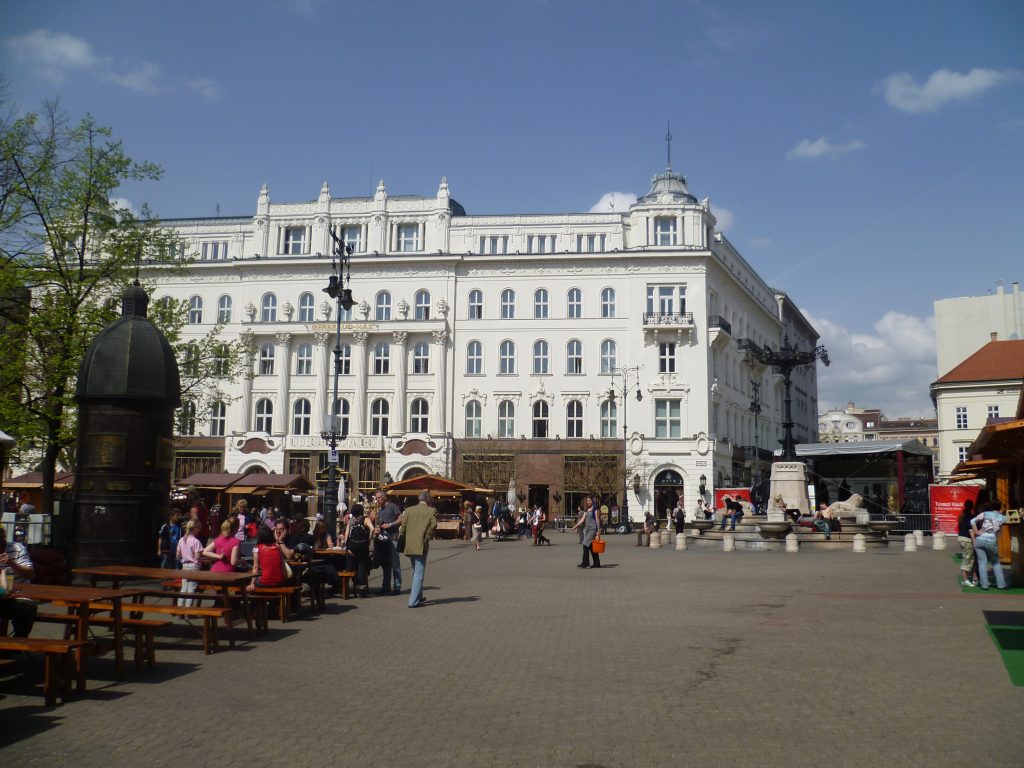 It is in this wonderland of traditional Hungarian deliciousness that I opt to try the rooster testicle stew. 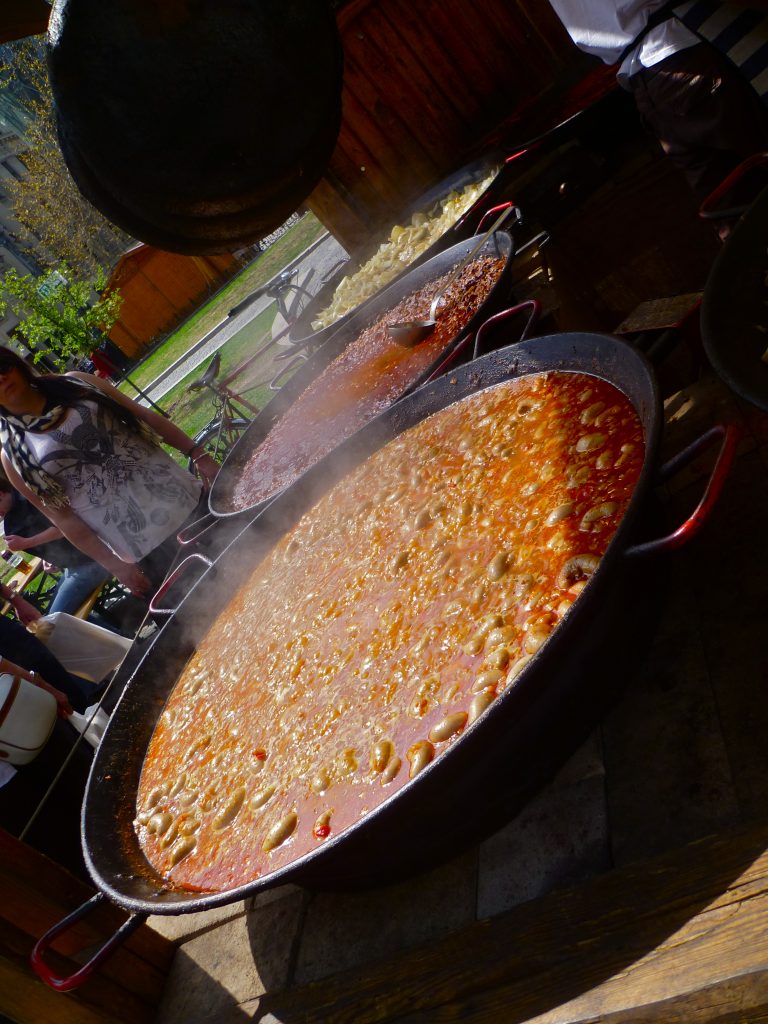 I see them there, bubbling away in their own cauldron – bobbing up and down in a sea of fiery paprika lava. I inch closer to the pot. I step into the line.

You’re not really going to eat that, say the boys, eyeing me sideways. We knew you were a champion ball breaker – now you want to eat them, too?

The truth is, I’m not really all that excited about the ball-eating. It’s more a matter of principle, really. While the idea of eating testicles is not super duper appealing to me, I just  fucking love eating new things when I travel. It’s my thing, man. I mean, eighty percent of the traveling writing I get published revolves around food and food culture. I can’t help it. I want it all. Especially if it’s protein. Any protein – fish, fowl, beast, reptile – and any of their various parts. Growing up in Florida taught me to think outside of the box when it comes to what kind of animal equals food; living in Japan taught me to love organ meat; living in Ireland taught me to love the cold bloody smell of butcher shops; visiting Germany made me realize just how much I love my flesh raw. Guinea pig? Python? Kangaroo? Yeah, I’d put that in my mouth. As long as it’s not alive or endangered, I’ll have another, please, and make that rare. 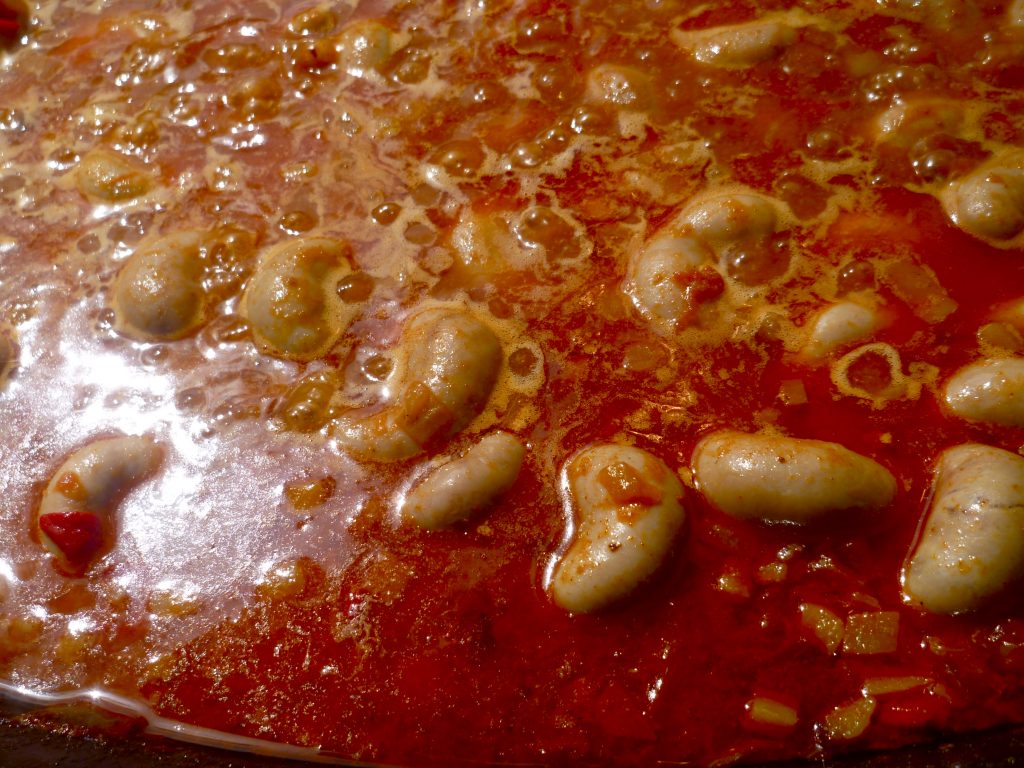 I’m served my dish of kakas töke pörkölt. I take it to my table, where the boys are shaking their heads at me. Har har har, they say. What balls! Har har har! 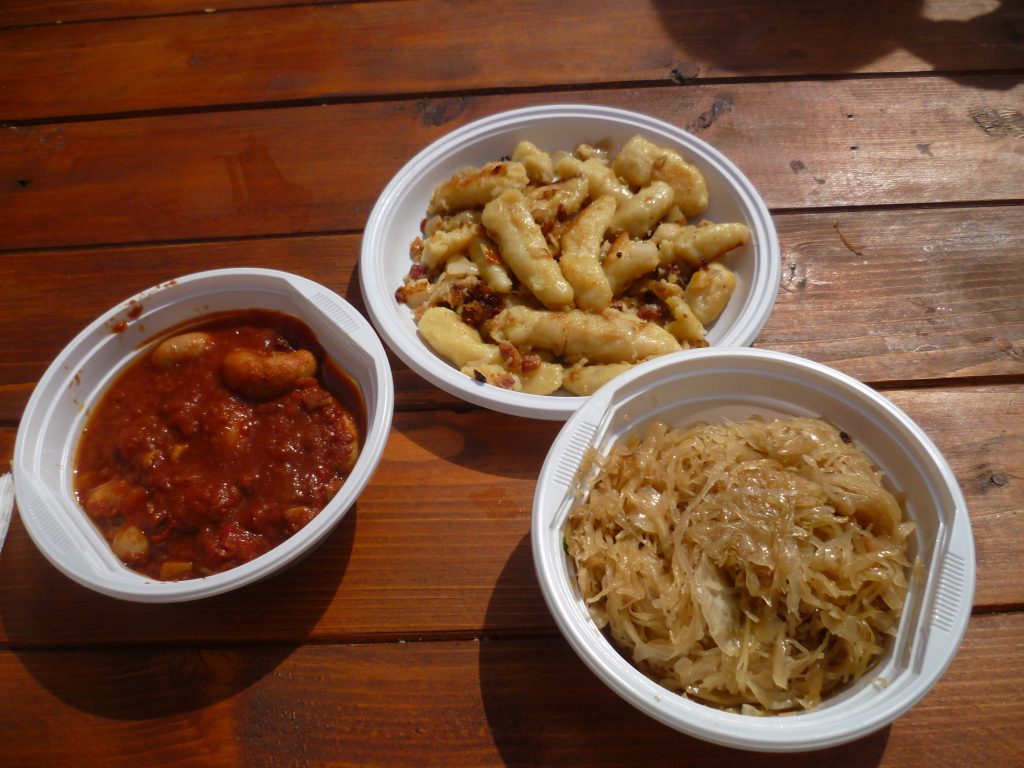 And indeed, they are some balls. Enormous and kidney-shaped, they are covered with a transparent, sausage-like skin and mealy in consistency like liver pâté. The closest I can come to describing their flavor is “gray.” Upon first bite, I don’t like them very much. I still don’t like them upon second or third bites – the spicy red sauce doing nothing to mask or enhance the taste. The boys have stopped making ball jokes and are doing their best not to watch. To tell you the truth, so am I. I take frequent sips of my lemonade, alternating with the dödölle, which I love – hearty little nuggets of potato stir fried with onion and lard, slightly blackened by grease. The girl at the kiosk has served me ten rooster balls, but I’d have been happy with one. As much as I hate wasting food, I eat only six before I push the plate aside. Katarina, who has been monitoring my progress, nods her head: Yes, she says. You’ve made a wise choice stopping there. The girl at the kiosk went overboard; ten balls are really too many for any one person.

We’re driving to the city of Pécs, where Katarina is from, and where her parents are hosting us for dinner. She informs us that there will be babgulyás – bean stew – and palacsinta – crepes. It’s only been a few hours since I downed the rooster balls, but the very thought of more stew – plus jammy sweets! – is making my mouth water. The highway is clear and smooth, and in the distance on either side, we see small red steep-steepled houses. I watch the sun set – glowing pinks and purples. Watch the street signs flash dwindling numbers of kilometers: Pécs 156 km, 132 km, 100 km, 86 km.

It is at about the 86 km mark when, suddenly, I am seized by a series of stabbing pains in my gut. I say nothing, because they’re just cramps, and I figure they’ll be over in a minute. But they aren’t. They follow me all the way to Pécs, and inside Katarina’s house where we meet Anna and Attila, Katarina’s parents. We sit down at the dinner table, speaking Italian to Anna and Attila while Katarina plays interpreter, switching back and forth between Hungarian and Italian. The babgulyás is perfect – thick with beans, paprika and flaky pink pork’s foot – but my stomach is still seizing, the cramps becoming sharper and sharper until I feel forced to apologize to Anna for my reluctance to serve myself another bowl – a treat my mouth desperately wants but my stomach vigorously cries against. Katarina translates my plight to her mother in Hungarian, and Anna rises to open the cupboard, where she pulls out a bottle of vinegar and a box of baking soda. You drink, she says to me in English. Good for stomach. But you do in bathroom.

My stomach cramps again, and the boys have begun to snicker: The balls, they say. You just had to eat the balls. I excuse myself and head to the bathroom, shutting the door behind me and resting my elbows on the sink as another wave of sharp cramps hits me. I straighten up. I drink the baking soda and vinegar; it goes down like a bitter bullet. And then I lift my shirt to look at my stomach. I’m greeted by a horrible sight: normally flat as a board, my stomach has distended to three times its normal size, the swelling extending even from the sides of my ribcage. When I press a fingertip against my belly, it is hard. Panic flutters through my chest, and for one brief, ugly moment, I’m convinced that I’m pregnant – knocked up by a dead rooster’s nut – and the stabbing pains are contractions heralding the birth of a flock of little half rooster/half Mes. They will have their father’s(s’?) feathers and spindly legs; my face and non-porous teeth. How am I going to take care of mutant children when I can barely take care of myself? And what will I even tell them? Sorry, I don’t know who your father is. We were never formally introduced before I ate his best parts. To tell you the truth, I didn’t even enjoy it all that much. The villagers will point. The villagers will stare. They will say: There goes that E with her brood of roosterless chicks. Just goes to show you what happens when you can’t keep your mouth shut. They will pause. They will sneer. They will say, under their breath but loud enough for me to hear as I pass: Food slut.

A gentle knock on the door, and I yank my shirt back down. I’m coming, I’m okay, I say. I’ll be right there.

My stomach is swollen for two days, and every time I say a sharp word, the boys bok like chickens. I’m miserable, staring at my friends’ plates of spicy meats in wild jealousy while sucking down bland spoonfuls of consomme. Finally, at Katarina’s insistence, I try some pálinka; traditional Hungarian fruit brandy. It’s a digestive, she says. It should help your stomach. I agree to a giant-sized thimble of the stuff, and feel the apricot-tinged burning from my throat down to my chest, like a fireball. But the pálinka works, and by the next day, I am back to stuffing my face like a madwoman; frenzied as a cat in heat. And it turns out that I like pálinka quite a lot, so I drink heaps of that, too. Töltött káposzta – no problem. Csirke paprikás – no problem. Goose lard – no problem. There is no more preggo belly and there are no more cramps for the rest of the trip as long as I have my four giant-sized thimbles of pálinka a night.

That’s why they make the stuff, you know.