My friend Sean’s grandfather is a hale and hearty 80 years old. He talks politics, walks upright, drives at night, and makes his own jam from the fruits and berries in his garden. He serves that homemade jam with his homemade bread when he sits us down for tea. What an absolutely lovely man. We saw him recently when we went down to Cork a few weeks ago for Sean’s brother’s college graduation. Sean’s great aunt – also in her 80s – arrived to dinner; stooped and pushing a walker. Sean’s grandad carried the walker for her while someone else helped her down the stairs.

It must feel great, I think, to be 80 and helping out other folks your own age.

“Ah,” says Sean. “But he keeps himself well. He never drinks. He eats fish all the time.”

And, Sean adds, his Grandad eats Flahavan’s porridge every morning.

“Hold on,” I said. “Porridge?” I imagined Sean’s grandfather woken up by a cruel schoolmaster’s whip at 5 every morning, before being flung into a dining hall full of screaming street urchins for a breakfast of pale, watery slop.

“Of course,” Sean says. “Porridge. Don’t ye have it in America?”

“No. We’re a first world country.”

“Backwards, the lot of ye.”

Later, we’re shopping for groceries and we’re in the grain aisle.

“Look,” Sean says. He points to a square bag emblazoned with the words Flahavan’s and a picture of a bowl of what looks like nice, healthy oatmeal. “That’s what my grandad eats.” 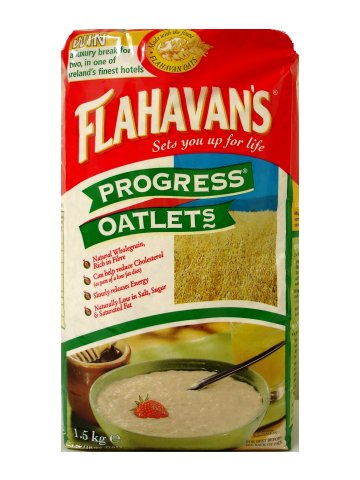 Well, more or less – the former (popular in the UK and Ireland) is made from steel cut oats whereas the latter (traditional in America and Canada) is made from rolled oats but the end result of both oat treatments is hot cereal. Two words for hot oaten cereal, such powerfully different connotations … at least for me; an American who’d mostly heard the word “porridge” linked with Dickensian urchins. There was that Goldielocks kid, I suppose, but I always figured the moral of that story was that greediness = bad, especially if you’re so greedy you meet your end because you can’t even resist orphan food.

Often, British-English words seem fancy to Americans – a cookie is something we cram in our mouths by handfuls after a break up but a biscuit is something we’d have with high tea … if biscuits weren’t delicious handfuls of buttery fluff eaten with fried chicken, that is. You’d buy garbage bags at a store and artisan candy at a shop. But when it comes to those British-English words that sound so fine to us, porridge is one notable exception.

It’s warm, it’s cozy, it’s a fuel rocket in the stomach. A 19th century New England Fisherman might eat it on a cold, blustery morning before whaling. Thar she be, lads – sup ye hearty afore the sky be red. Quakers ate it to pump themselves up for long days of quilting and fluffing oatstalks with a pitch fork. That be good, sister Prudence. Thank thee, brother Essence. That’s nutrition. That’s oatmeal.

Porridge is what you eat when you’re poor, when the nuns have given you to the foundry. You’ll see he has a bit of cheek in him, Mr. S____. And his parents – poor as church mice and dead of the consumption. See that he minds you; feel free to give him the strap or box his ears if he doesn’t.

The Quaker versus the Urchin – for me, oatmeal wins every time.

“You should eat more porridge,” says Sean. “It’s good for you. Just look at my grandad.”

He’s right. I should eat more oatmeal, even if I always want it to taste like grits so I can put Tabasco on it. High cholesterol runs in my family and it wouldn’t hurt me to have oats instead of cake once in a while.

Sean is making some for us right now. He’s brewing it on the stove, thick with low-fat milk.  I’ve got my little bowl in hand and hope he’ll give me seconds.